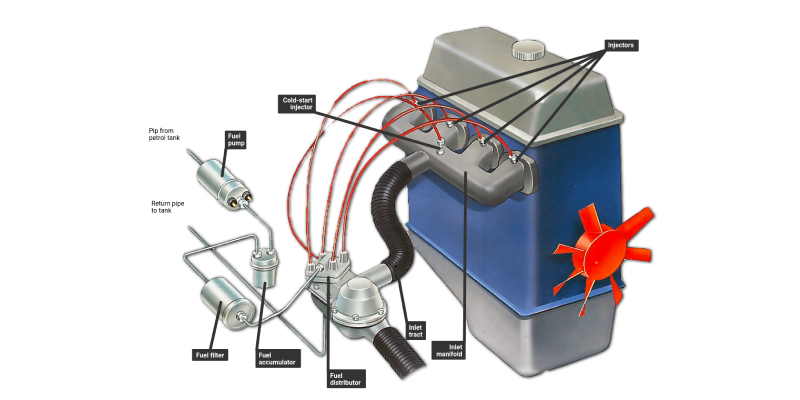 Engine’s supply of fuel is controlled by the Fuel Feed System. In Petrol engine systems, the below methods are used to pump fuel from the tank into the cylinders in the engine. They are:

In the above listed fuel feed systems, the first four uses Carburettor where as the last, Fuel Injection System works with an injector so as to supply fuel to the cylinders in the engine.

Gravity Feed System can be mainly found in miniature vehicles such as bikes, two-wheelers, quads, etc. The engine is mounted at the highest level possible so as to have smooth supply of fuel into the engine smoothly with the help of carburettor float using gravity as the source. The design is not only uncomplicated but also cost-efficient when it comes to manufacturing and maintenance. The only drawback in this whole design is that the fuel tank will need to be placed above the carburettor for this method to work fine.

Using the engine’s pressure created by suction, the fuel present in the primary tank is sucked and is delivered into the secondary tank present in the system. Fuel to the carburettor is supplied from the secondary chamber using gravity. This system is not much in use anymore.

An airtight fuel tank is the key to this pressurised feed system to work consistently. The pressure is established using an air pump or the exhaust in the engine creates the pressure. The engine ignition is done manually by priming the pump with hand creating the pressure, which powers the fuel to the carburettor. The disadvantage in this system is the pressure leakage chances are high. But this does not affect the placement of the fuel tank.

Cars nowadays are using this system. The petrol is delivered to the pump using a steel pipe, which in turn is pumped through flexible pipes for the fuel to reach the carburettor chamber. If the fuel pump fitted is a mechanical one, then the engine’s camshaft drives the fuel, thus requiring the pump to be attached to the engine itself. But in case of a electrical fuel pump, the placement can be anywhere. The production companies usually place the fuel pump inside the tank so as to eliminate vapour-lock.

All modern day vehicles uses petrol injection system instead of carburettor system. The nozzle in the injector helps to atomise the fuel. Through the air stream, the fuel is then reached to the engines. The newest advancement is the usage of individual injector for every single cylinder. Manual or electronic controlling of air-fuel mixture is possible for every condition of speed and load, making the precision of fuel system perfect.